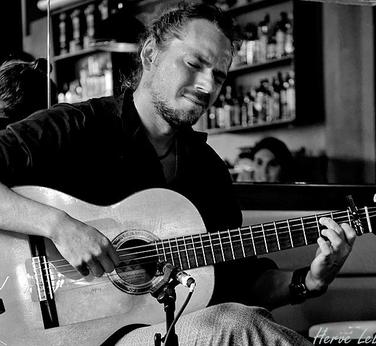 Evocative, precise, passionate. These are just a few of the words that have been used to describe the flamenco performances and choreographies of Canadian dancer Lia Grainger. Her unusually long and lean physique makes Lia something of an anomily in the flamenco world, a fact she has embraced to create a choreographic vocabulary and quality of movement — sharp and elegant — that is all her own.

Born in Vancouver, Lia began her dance training in 2002, studying with renowned maestros Oscar Nieto and Kasandra “La China.” In 2004 she started performing regularly at the city’s flamenco peña, Kino Cafe. Lia performed with Vancouver’s Mozaico Flamenco Dance Theatre in 2007 before relocating to Toronto, where she continued her studies with Canadian flamenco legends Carmen Romero and Esmeralda Enrique. Lia continues her studies with many of Spain’s great artists including Manuela Rios, Farruquito, Manuel Betanzos, Ursula Lopez, and Alicia Marquez. In 2012 she toured nationally with Flamenguitos del Norte Dance Company and was a featured performer at the Vancouver Jondo Flamenco Festival and the inaugural Montreal Flamenco Festival. That same year Lia began dividing her time between Canada and Spain, and continues to do so today.

In 2013, Lia was one of just three dancers nationally to be selected for participation in the prestigious "Paso a Paso" mentoring program run by Myriam Allard and Hedi Graja of the contemporary flamenco company La Otra Orilla. The following year, Lia was honoured to share the stage as a performer and choreographer with artists from a wide range of dance disciplines in “60x60”, a NextSteps production directed by Viv Moore at Toronto’s Harbourfront Centre Theatre. In 2016 Lia was a headlining performer at All Over the Map, a festival celebrating international dance produced by Vancouver’s NextSteps. Lia was one of six North American flamenco dancers selected to compete in the 2017 CERTAMEN USA, a competition that takes place annually at Lincoln Center in New York City.

For the past several years, Lia has devoted much of her creative energy to Fin de Fiesta Flamenco, an international flamenco dance and music ensemble she co-founded in 2012 with Canadian guitarist Dennis Duffin. Lia spends much of each year choreographing new work in close consultation with the ensemble’s musicians in Seville. Fin de Fiesta tours festivals and theatres across Canada each summer and in 2017 completed a 40-show tour of Canada and France. Lia has received support for her choreographic and performance work from the Canada Council for the Arts, the Ontario Arts Council and the Toronto Arts Council in the field of dance.

Born in Havana, Cuba, Hanser began his musical studies at the age of six. By the age of sixteen, he played professionally as a timpanist for the Sinfónica Juvenil of Amadeo Roldán Conservatory, performing in the most prestigious theatres and festivals of classical music in Cuba. After graduating from Amadeo Roldán Music Conservatory in 2007, he began to explore differents styles of music, leading to collaborations with various Cuban artists and students from the Berklee College of Music. International collaborations include Lisa Nordström (Sweden) and La Fura dels Baus (Spain) to name a few. During the same year, he began touring throughout Cuba, Colombia and Canada with the Opera de La Calle. While participating in the Festival Internacional del Tambor (Cuba) in 2012, he won first place in the bata drums category. Since 2014, he resides in Montreal, Canada, performing with various flamenco, latin music and jazz artists. In recent years, he had the pleasure to perform in the Montreal International Jazz Festival, Just for Laughs, Pop Montreal, Nuits d’Afrique and the Festival de Flamenco de Montreal. 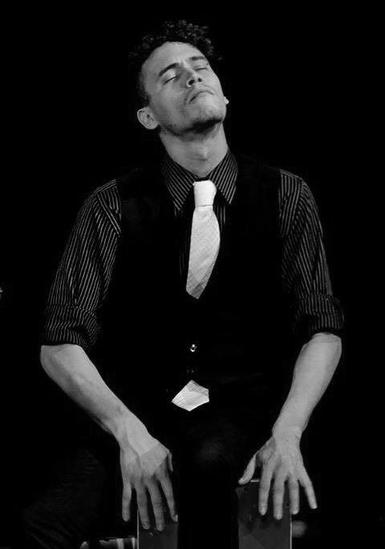 Dennis Duffin grew up in a musical family playing guitar from a very early age, and was taught flamenco by his father with whom he performed as a teenager. Today, he is a regular in the Canadian Flamenco scene, playing for renowned artists in Spain and in Canada including Flamenco ensembles Fin de Fiesta Flamenco, Esmeralda Enrique Spanish Dance Company, Ilse Gudiño's Amigos de Pilar, Flamenco Nomadico, and Flamenguitos del Norte. Dennis has also performed in a wide variety of World Music fusion groups such as Ventanas, the Lemon Bucket Orkestra, Mashregh, Joanna Moon, and even a stint with Jesse Cook.  Dennis attended the final year of the Fundacion Cristina Heeren in Sevilla in 2012-2013, with teachers such as Pedro Sierra, Niño de Pura, Paco Cortes, Eduardo Rebollar. In Canada, Dennis studied with Nicolás Hernández, Jose Vega, Rubén Díaz, Oscar Lago, Tino van der Sman and José Valle “Chuscales”. Living in Seville this year, he has had the chance to study with maestros such as Tomatito, Manuel Parilla, Jesus Guerrero and Alfredo Lagos to name a few. Apart from music, Dennis also holds a Ph.D. in astrophysics from McMaster University

Alejandro Mendía started his flamenco cante studies in 2007 in Sevilla at the renowned flamenco academy of Christina Heeren. After completing intensive study of cante, compas and flamenco history classes, he continued his studies with Esperanza Fernandez, Niño de Elche and Encarna Anillo. After only a few months in Sevilla he was asked to participate in the televised talent series "Tienes Talento" and placed in the semi-finalist  category. Alejandro's relocation to Jerez brought a new facet to his singing as he began to accompany dance classes (Manuela Carpio, Ana Maria Lopez, Chiqui de Jerez). In Spain, he has performed in several important locations including Peña Tío Jose de Paula, La Dama Juana, Peña Puerto Lucero, Taberna El Chusco and Peña La Zúa. Alejandro's talent has taken him all over the world. Recent tours include shows in Morocco, Ecuador, Mexico, Canada, Malaysia, France and Switzerland. Alejandro currently lives in Bordeaux and his new album, "La Luna y El Sol", with flamenco/balkan fusion group, "Les Noces Gitanes", has received outstanding reviews. 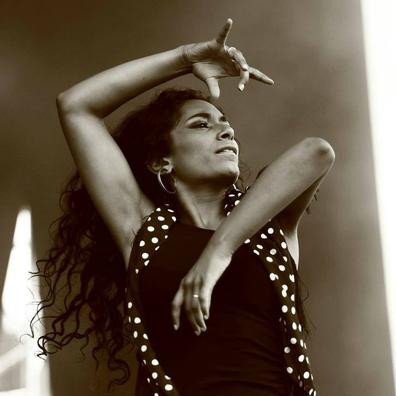 Lara Wong is a flamenco flautist with an eclectic style of playing stemming from her jazz and classical roots. Originally from Vancouver, B.C. Lara now spends most of her time in Seville, Spain where she performs with various flamenco groups while she studies flamenco singing. In Canada, Lara is known for her work not only in flamenco but also playing in various Latin and African bands. Outside of her work in Spain and Canada, Lara has toured in Mexico, Armenia, and Japan. She has studied in Spain with Calixto Sanchez, Pedro Sierra, and Jeromo Segura and participated in workshops with Jorge Pardo. She also holds a Performance degree from McGill University where she studied jazz flute with David Gossage. This will be her second tour with Fin De Fiesta Flamenco. 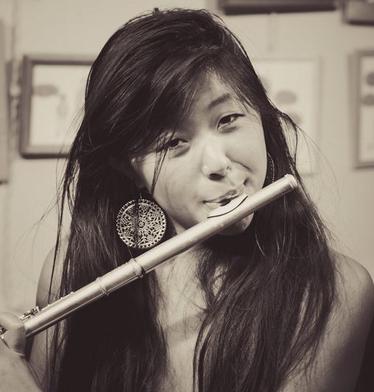 With over 10 years of experience as a professional flamenco dancer, Deborah "La Caramelita" has performed to audiences worldwide. Her work has taken her to countries such as Ecuador, Portugal, Canada, Spain, Malaysia, Russia and Morocco with established artists like Marien Lluevano, Rosario Ancer, Marieno Cruceta, Raul Castro and Juan Manuel Cortes. After living and studying intensely in Andalucia for several years, Deborah returns often to perfect her art with renowned masters of flamenco dance as Carmen Ledesma, Mercedes Ruiz, Juana Amaya, Isabel Bayon, Alicia Marquez, El Oruco, among others. Recent productions with the flamenco/balkan fusion group, "Les Noces Gitanes" at the Winnipeg, Calgary and Vancouver Folk Music Festival reached audiences of over 15,000.

Other productions in which she has participated include: the opening ceremony for the Rolex world cup in Geneva, the Pachu Uchuk festival and socio-cultural initiative in Ecuador, the Mis Hermanas western Canada tour, as well as several international flamenco festivals in Europe. 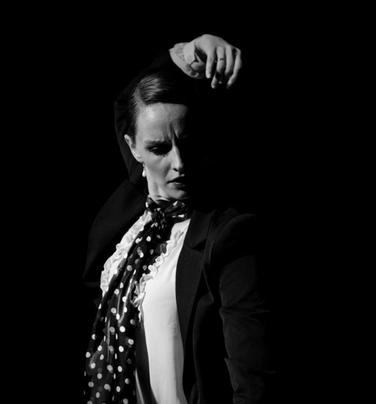 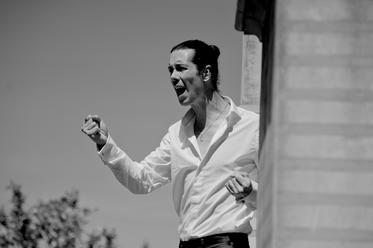